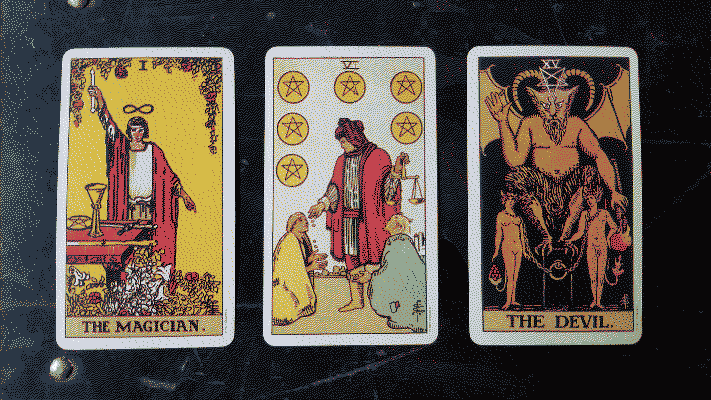 the magician and the devil seek one another, and trap one another. their relationship empowers each and shackles both.

the devil represents material bondage, and relates closely to pentacles, to wealth and debt and control. the devil for me has long represented capital.

the magician represents the individual who through action materializes their intention into concrete reality.

the 6 of pentacles represents disparity or imbalance - having and not having - power, wealth, knowledge, ability.

because ive always viewed both the devil and the magician as essentially all-powerful, the 6 of pentacles had me thinking of the ways in which each is weak compared to the other.

the devil is immaterial, represents great power, but needs the magician to enact his will. capital is material wealth (dead labor) that serves its own accumulation through its dominion over living labor. it is not the material wealth itself, but the relationship of domination: it only exists while human actors serve it.

the magician may view this power abstractly, the living producer occluded, their produce symbolized into pure money, but in truth the power of the devil is rooted in its consumption of new lives. the devil is the great vortex of souls which the magician may use to enslave his fellows, forcing them to enact his will while draining them and thereby growing the vortex.

ultimately the devil will consume the magician too, unless the magician lives to see his thralls overtake him and the devil both. even in the moment, the magician in a way destroys his humanity by becoming the devil's vessel. in a way he becomes the devil, and his soul is lost.

i want to believe that the magician can trick the devil, can invite the devil in and, acting secretly on behalf of the great mass of living souls the devil hopes to consume, can put the devil's power to work towards his own destruction.

maybe the magician represents human action generally, or human ability to act from intention and so change reality. the magician points to the sky to represent the abstract, then towards the earth, saying 'as above, so below', and in this way can be read as representing the exertion of the will upon material reality.

in this way, the magician can represent anyone who finds intent from idea and acts willfully to change the world.

im reading Cultural Revolution and Industrial Organization in China by Bettleheim and a throughline is the willful 'putting politics in charge' within industry. even under socialist governance, capitalist practices are the default inherited practices. to make the successful transition to communism, people must continually critically evaluate and push against these defaults, making sure to let the ideological goals drive them rather than the various carrots and sticks of the still-moving economy.

this is a goal for me in the present and the future: to put politics in charge, to not fall into the grooves that have been made by past actors, but to instead be part of the drive to change the world towards something better. as above, so below!