working in the tactics genre has me thinking about functional meaning arising from the spatial relationships of elements on a grid. much of whats beautiful in tactics systems is the way spatial relationships are intuitive but with more than just a few elements, quickly become highly complex. moving one piece alters the relationship between that piece and every other piece on the board.

the state of the board is readable in an instant, and the relational meanings of the pieces are (in most good tactics games) intuitive and easy to internalize, but the complexity is nevertheless incredibly hard to track, and watching that complexity play out is surprising and beautiful like watching running water or a flame or clouds, or anything complex in life. 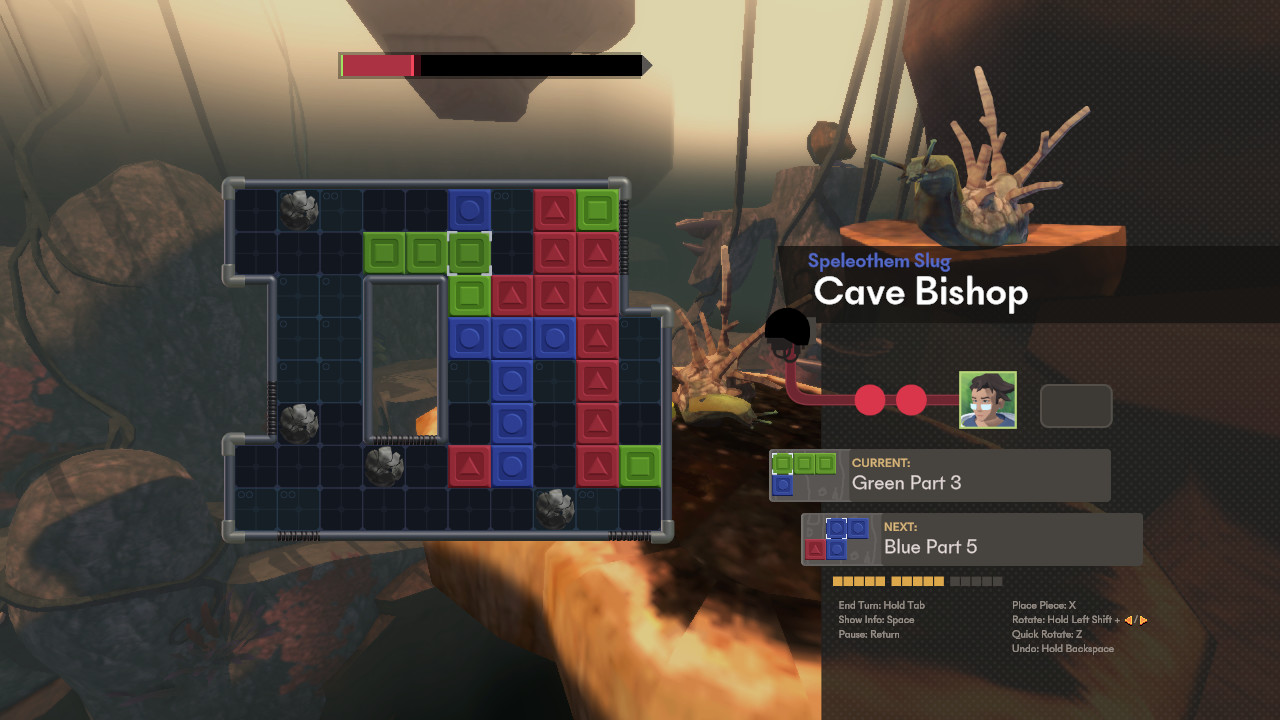 recently one of my favorite developers, Analgesic, announced their next game Sephonie, which features what they call a "puzzle grid", which I don't fully understand yet, but which seems to work in this space of 'functional meaning arising from the spatial relationships of elements on a grid', but in a highly different thematic context.

shortly afterwards, i saw this thread from another team im excitedly keeping an eye on, about their match-3 game Spirit Swap's systems. it surprised me because their spell system is extremely familiar to me, very much like some ideas ive been developing for a future tactics game.

seeing tactics-like systems in these 'casual puzzle' sorts of games feels like when i walk into a familiar neighborhood from an unfamiliar direction, and two previously separated mental maps start to connect in my brain.

game genres, especially among designers, are traditionally split along mechanical lines. genres are defined by mechanics, systems, interaction paradigms. i think it's interesting how inappropriate it feels to refer to these games as Tactics games, despite the clear overlap in their systemic core - it goes against this grain.

but that inappropriate feeling does make sense if you try to contextualize the concept of genre in art more broadly, outside of games. in fiction, where genre is probably most heavily culturally rooted, genre often has more to do with setting, viewpoint, and aesthetic.

interestingly, this kind of genre does map onto the newly influential category of 'wholesome' games, where both Sephonie and Spirit Swap might fit, more or less. whereas of course tactics, as a genre, feels intuitively at odds with wholesome.

defined purely mechanically or functionally, i actually think tactics could fit very well within the aesthetic framework of wholesomeness. turn based (and so relatively low stress) games with naturally intuitive spatial interactions, focused on the surprising beauty emerging from simple systems - these things are in no way at odds with the kind of chill positive vibes that wholesome implies.

but tactics is not a purely mechanical genre. it carries a lot of aesthetic baggage, i think partially because of the association of 'tactical' with militaristic subcultures - 'tactical' means cop shit, almost anywhere outside of games. it is also nearly essential to the (reality of the) genre that it represents a fantasy of violent confrontation, generally in the setting of a war or imperial project. as the genre has lingered on and developed, i think it has swung further and further into this specific fantasy niche, and so has catered to the personalities who want to inhabit this war fantasy. you can see this in how the genre classics (see FFT) are more anti-war, anti-hierarchy, and how the new genre hits (see XCOM, Battle Brothers, Fell Seal, even Into the Breach) are generally about playing as agents of the empire against either an evil Other or against Crime. this sucks!

but regardless of how i feel about it, i think game-makers should pay attention to how genre actually works organically. most players are not motivated to spend their time with your art because it shares functional components with other work they liked. most players are motivated by aesthetic, setting, fantasy. i think this is an important lesson to take from what the Wholesome games movement has accomplished.

for me this means that going into our next game, which i consider to be functionally a tactical RPG, we're gonna communicate about it in a way that's more vibe, setting, and fantasy focused. we're not gonna expect that our audience knows the genre classics, or even knows the genre of 'tactics' exists (though i suspect we'll continue to make some of the best shit in the genre). i hope Tenderfoot Tactics stands as an indelible mark on the genre so that those core players who aren't pushed away by our brighter, softer vibes know to follow our work. but i expect many of our new players will be relative outsiders to tactics.

i think what we're doing is valuable work, and challenging, in that we're taking a developed systemic toolset long-mired in masculine, conservative aesthetics, and bringing it to an audience that finds those aesthetics unappealing, and so hasnt maintained a familiarity with the mechanics.

these ruminations held special context and value for me because of some other thoughts that i didnt spell out here, so now im going to try to:

back when i was in school, i thought a lot about what games were as a medium. the working concept i carry around is that game genres, as id understood them, were a closer metaphor for a medium. structure-genres of games carry with them cultural contexts for how the game artefact is encountered by the audience, in the same way that a screenplay, poem, novel, painting, film, etc, all carry those encounter-contexts.

i developed from this conception the idea that 'game design' is too big and vague of a category to be something that an individual could expect to become proficient in over their lifetime. i resolved to try to find or develop a 'genre' (structural) to specialize in, so that i could build a coherent internal language and really grow as an artist.

i had a second, faulty assumption, that genres more or less carried audiences. this assumption was something i did not scrutinize until recently. i think i was being sloppy with the word 'genre' and bringing in assumptions from how fiction genres work within their mediums. 'romance' does carry a certain audience, as does 'horror', but these categories arent like mediums or structural game 'genres'. they're more like the wholesome vibe-based genre categories. and interestingly they also stretch across mediums/structure-genres: horror stories, horror movies, and other horror games share an audience, to some degree.

i think labels have a purpose here. labels organize vibe/audience categories made up of many artists (potentially working in different medium/structures). theyre inherently community-democratic in their curation (this automatically happens somewhat with market forces, but not perfectly and not proactively/predictively). (like most everything, they probably Should be largely worker-democratic in their operation.)

PPS, just to pull some loose threads together:

the interesting revelation re: tactics is that i no longer think game genres are simply the structural genres that designers (my past self included) sometimes act like they are. they often carry a lot of other aesthetic baggage.

another realization, probably borne of my self-perception as an artist rather than a designer, is that i dont necessarily want or need to specialize in a hyper-specific structural niche to live a good life and make good work. i think to some degree im more interested in exploring certain themes across multiple structural genres or media. i mean this is what ive been doing anyway, and its something i appreciate in other artists.