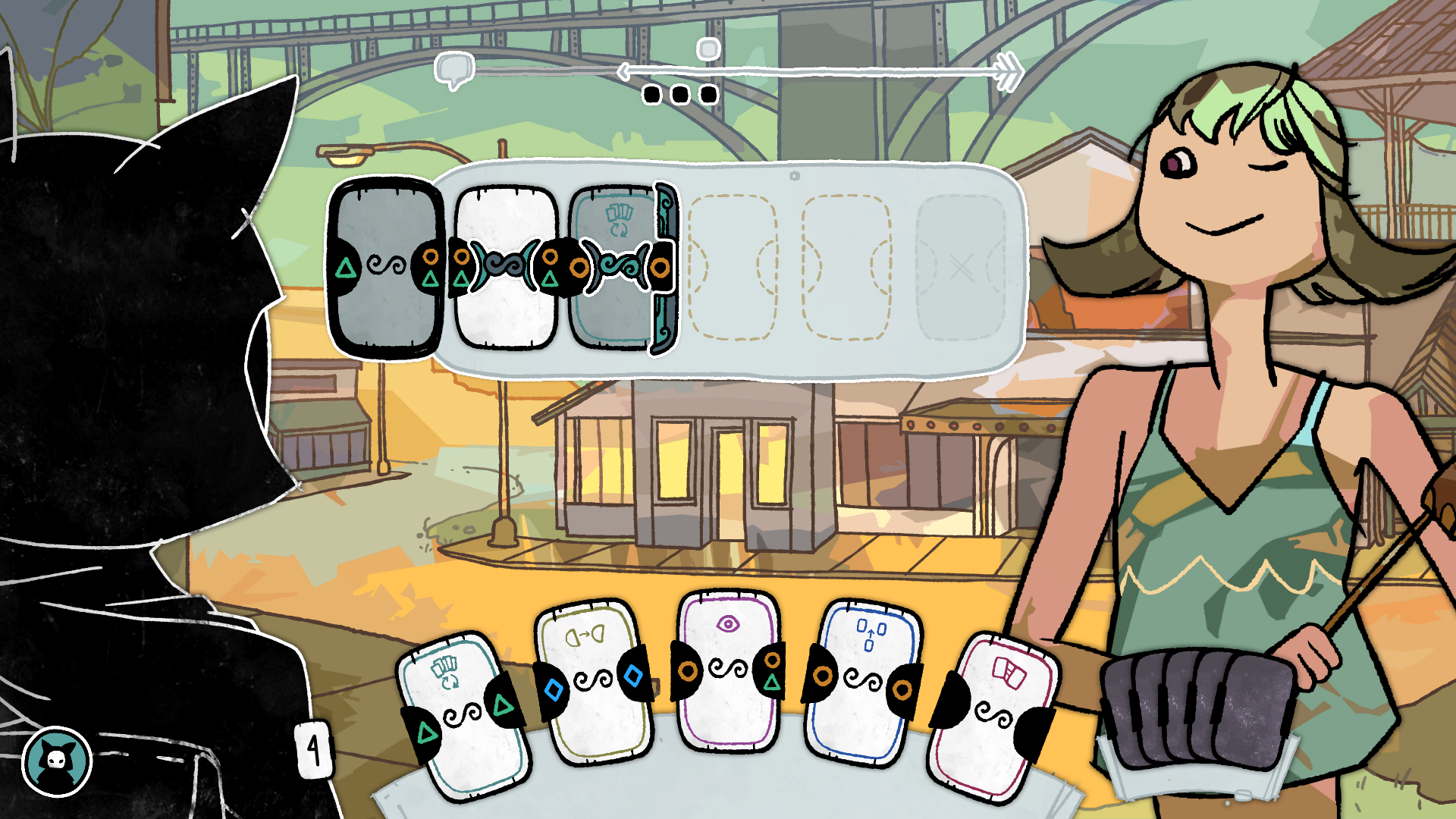 Note: If you haven't played this game, this post might make no sense to you. Still, I did mark off the spoiler-heavy part, for some reason.

Okay first of all, I love love the music, art, and much of the writing. I found the design to be really interesting intellectually and, for much of the game, enjoyable to interact with as a player. I think this game is a major feat, especially as a first project from a new team, and I think it deserves the accolades it has received. Now to say some more complicated and messy things!

The mechanics are very clearly saying *something* about communication, in a way that I think encourages the player the ask what they're saying, what they mean.

I think this (mechanics-as-metaphor), coupled with the visibility of the process of design (paper prototypable card mechanics) seems to have impacted coverage, or at least the coverage I encountered. There is a myth about game design and what constitute good game design processes: that designs should be prototyped physically, design is iterative, that you should go through many iterations before arriving at the right solution, etc. If you're reading this you've probably read a lot of that. I think games that appear to confirm that myth are seen favorably by the culture, because critics feel like they 'get' it and can see the witness-marks of a process they understand. Personally, I'm frustrated by the limitations that prototype-(and especially paper-prototype-)driven development creates around videogames. As a medium I think there is a much larger and more exciting space of games that can only be built as videogames, which is inherently unavailable to this paper-driven process.

To me, the main things the mechanics imply is that distance = difference = communication failure. You learn to be more like the people you encounter, and you also lose parts of your old self in the process.

I don't subscribe to any of these beliefs. I think humans are fundamentally similar across differences. I don't think distance creates different 'kinds' of people and I honestly find the implications of that thinking isolationist and borderline nationalist. I think differences between people manifest locally as much as they do across distances. I think we do not lose our old selves by learning and growing, but that we become richer and fuller people, still containing those old selves. I expect to be able to talk to my family and childhood friends for the rest of my life, despite us becoming very different adults.

'City of job' / 'city of type of person' feels like an inappropriate trope given the reality and humanity of this world, but also like it emerges naturally from the systems. Maybe this is related to what I dislike about what the systems represent, because I don't believe in that world. But on the other hand I can see how this world would come naturally from the kinds of systems in the game, and I can see how the systems in the game would come naturally from the choice of genre, which seems to have been an early, important design decision. There is a tendency to attribute the design results to the intentions of the people making them, but really we are building from the tools we start with. The game that comes out the other end is the result of a process that is nothing at all like an intentional act from a clear mind.

It's interesting and good how the goal in a conversation is collaboration with your partner rather than contest. Still, you're trying to manipulate systems, become powerful, succeed, but your enemy is the systems themselves, or maybe your own past decisions coupled with luck, depending on whether you're willing to assign blame to the systems, or whether you view the systems as fixed and so not responsible for the results. Playing it critically as a designer I think made me very willing to blame the systems.

The explicit framing of (near home = empathetic and creative) vs (foreign = harsh and industrious) feels like such a classic myth and a bad one.

It's interesting how branching in this game is often determined by success or failure (determined by the result of past choices) rather than direct, knowledgeable player choice. I really don't like how it feels as a player. I would like to live in the power fantasy of choosing my own adventure.

My post-catastrophe run really soured me on this game. Suddenly, communication became very difficult with everyone, because of the added symbol (representing trauma, roughly). I think representing challenging circumstances as turning people against each other and making communication more difficult is just, not something I agree with. But also just as a player it was a terrible experience. Everyone was so sad, and I couldnt speak to anyone. I think I failed 10 conversations in a row. Failure of a conversation in this game leads to no interesting story being presented to the player. So this wasn't just 'I don't like this because it's sad,' but the game fully closing itself off to me, not letting me experience the struggle the characters are going through, not letting me experience much of anything at all except gruff barks.

And then I reached Suzanne, a child who lives on a boat in the ocean, who is totally pessimistic about the possibility of a future.

Maybe this is the darkest moment, the pre-climax grim point of the story. Maybe it's actually successful in its function. At the time I felt like I was finally reaching out, getting past the coastal city that had previously rebuffed me, and I was just being slapped down. But part of me thinks this is the result of a common sense idea: that a game needs to get harder and harder as time goes on; however these are the critical tension moments of a long story I have been making my way through for many hours, and now when things are most intense and interesting I'm being told that because of luck, my past mistakes, or my tactical failures, I'm not allowed to read the story. I don't like it.

Another aspect of this that so frustrated me is that my 'mistake' was largely that, on this trip, I decided to prioritize being able to reconnect with my friend when I returned home, and so I tried to hold a couple of my empathy cards for the whole trip. I felt like I was being punished for not roleplaying as an adventurous big city salesman. This feeling was compounded when I returned home, *was* able to reconnect with my friend, but there was nothing there for me really, that story was not built to be a genuinely interesting option to choose. I was *meant* to be off doing exciting forceful logical industrious creative big city business things, and then to feel sort of sad to see my heartful but boring childhood friend, unchanged except they're a barrista now.

I think we talk about difficult vs easy games but I think we're sort of conflating two separate axes, difficult/easy and kind/cruel. A difficult work of art makes you do some work to engage with it, does not open up to you on its own. An easy work reveals itself to you gladly with no tests. A kind work lets you try again when you fail, gives you all the tools you need to engage with its sort of difficulty. A cruel work punishes you for failing its tests, does not give you any second chances, even critices or blames you.

SotS is sort of floating between difficult/easy, is maybe well balanced, but is more cruel than kind. I do not think it was a good decision to make conversations one-offs, to make failure irredeemable. It has a feeling of, the designers trying to replicate something they believe to be real. I don't care. It feels terrible, and not in an illuminating way.

It's really satisfying in SotS when you are able to succeed against odds, especially because of what it represents: bridging a difficult gap to make contact with someone very different from yourself.

The game is beautiful, the writing and the world design feels hopeful and human. The character design and backgrounds and colors are fantastic. Ultimately I really did not like the game, but I don't mean to impugn the team, who I think did a phenomenal job. It feels like a team that set out to say something different, and so created a work that demands analysis and engagement, and I appreciate that a lot. However I think the systems and genre they're building on guided them to a place that ultimately I really do not like.

Ultimately I also think it's a credit to the game that it made me think and feel so much. I play a lot of games that I don't have much to say about, even if I do like them more on the whole. They're easy, in a literary sense, in a way that Signs of the Sojourner is challenging and bold.